Nowadays, there are many kinds of laser equipment in the market.

Different types of lasers will be used for different materials and different requirements.

So which is the best solution?

After all, there is no laser technology that can meet all the requirements.

Even if the technology develops in the future, it will not change this characteristic.

Just like people have their own expertise, so will lasers.

It can do the best in a specific field.

At present, the domestic laser market is widely used, such as fiber lasers, CO2 lasers, semiconductor lasers and UV lasers.

These lasers are used in different industries and fields. Unlike other solid-state lasers, the fiber laser has a “high amplification resonator”, which means that most of the power of the resonator will pass through the output mirror, so the diffused light power will produce high stress on the resonator system.

Due to the small diameter of the fiber, it will increase the power density in the fiber to a dangerous level.

Nowadays, fiber laser is a piece of common laser equipment in the market, because its technology has been relatively mature, affordable and low operation cost. The beam wavelength emitted by YAG laser is about 1μm. This is in the near infrared band.

Due to the flexibility of beam transmission and easy integration into other systems, solid-state lasers are used in 3D manufacturing processes such as cutting, welding, or electroplating. Compared with the solid-state laser, the main difference is that its wavelength is 9.4 to 10.6 μm.

It plays an important role because of its different laser absorptivity in metallic and non-metallic materials.

The power range of CO2 laser ranges from less than 10 watts to more than 20000 watts and can operate in continuous wave mode or pulse conditions.

With sufficient resonator length, the appropriate laser design can obtain excellent beam quality. Its efficiency is between the round rod laser and the disk or fiber laser. At the same time, it is widely used in biotechnology, medical equipment and disinfection equipment requiring UV radiation.

DPSS UV laser based on Nd: YAG / Nd: YVO4 crystal is an excellent choice for micromachining system, and is widely used in printed circuit boards and consumer electronics.

Semiconductor lasers, also known as laser diodes, are lasers that use semiconductor materials as working materials.

Due to the difference of material structure, the specific process of different kinds of laser is relatively special.

Semiconductor lasers used in industrial laser equipment are generally 1064nm, 532nm and 355nm, and the power ranges from a few watts to thousands of watts. 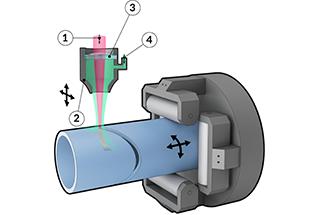