The experimental research work of RLW first appeared in 1996 and was proposed by John Macken.

For a long time, RLW technology research work has been applied to various types of lasers.

The high-power fiber laser with a wavelength of 1080nm can not only realize the fiber transmission of the laser beam, but also enhance the flexibility of processing and the accuracy of focusing.

The CO2 laser has a long wavelength (10.6μm), so the generated beam cannot be transmitted through the optical fiber.

Due to its suitable wavelength and excellent beam quality, high-power fiber laser has unparalleled advantages in RLW applications, and is an ideal choice for replacing traditional CO2 lasers and Nd: YAG lasers.

The working principle of RLW is to reflect and position the laser beam through galvanometer scanning, so that it can be transmitted to the surface of the workpiece at high speed.

Now, the most widely used in the RLW field is 2D scanning.

The 2D scanning unit is actually a galvanometer system, including two light scanning mirrors that can be rotated electrically.

The system can handle 5 kW output power, which is more economical than 3D scanning.

Of course, RLW also faces many challenges, such as requirements for pre-processing, requirements for welding quality and stability, the need to provide shielding gas, and special attention to the clamping and positioning of the plated sheet.

These parameters can be roughly divided into three categories: beam quality, processing parameters and material properties.

The concept of RLW is not particularly novel. Its principle is mainly to reflect and position the focused laser beam at a certain distance above the workpiece through a scanner. The focal length is usually between 1000 and 1600 mm.

In 1996, John Macken conducted the first RLW test, using a laser with a focal length of 1600 mm to achieve small hole pattern welding. This test is considered a milestone in the history of RLW process development.

The scanner can help the laser beam to be correctly projected on a large workpiece with an area of 1 m×1 m or even more than 2 m3, and the welding speed can reach 30 m/min.

The RLW system with integrated scanner uses a scanning unit (usually a 2D scanner) to position and focus the laser beam, as shown in Figure 1(a);

The robot-based RLW system refers to a long-focus laser optical mirror and a six-axis robot to complete the operation, and the robot is responsible for positioning the laser beam on the surface of the workpiece, as shown in Figure 1(b). Figure 1. RLW system with integrated scanner (a) and robot-based RLW system (b)

To obtain good remote welding results, the following three conditions must be met:

The scanner will ensure that the beam is correctly guided on the surface of the workpiece according to the required welding path and positioned quickly.

The highly flexible and lightweight scanning head enables the beam to move extremely fast between welding points, which means that the time required for positioning will be much lower than that of traditional laser welding processes.

Figure 2 shows the typical components of a scan head.

The scanning unit is mainly composed of a set of galvanometer and lens.

In remote welding, the laser beam first passes through the lens.

The lens can be moved along the optical axis to change the focal position.

The laser beam is successively reflected and guided by the X galvanometer and Y galvanometer, and finally follows the established weld seam to accurately focus on the surface of the workpiece. Figure 2. Typical components that make up the scan head Figure 3. The main components of the 2D scanner system

In recent years, high-power fiber lasers have achieved rapid development and have shown extremely advantageous characteristics in the field of material processing applications.

High-power fiber lasers with excellent beam quality can provide ultra-high peak power density, which can reach the order of several MW/mm2, which is essential for long-distance high-speed remote laser welding.

A lot of research data shows that high-power fiber lasers have many advantages, such as: Compared with the traditional laser welding process, the remote laser welding system with integrated scanner has many advantages, such as:

Because the RLW system with integrated scanner has fast welding speed and short processing cycle, it is more efficient.

Under normal circumstances, the welding speed can be increased from 6 m/min to 30 m/min. The specific welding speed depends on the output power of the configured laser.

Eliminating the non-working time of the scanner can further shorten the processing cycle by 80%.

The uninterrupted movement and fast positioning of the scanning head make the RLW system only need 50 ms to move between welds, while the robot positioning usually takes 2-3 s.

Therefore, the processing cycle of the RLW system with integrated scanner is 6-10 times faster than resistance spot welding or arc welding.

The long-distance operation between the scanning head and the workpiece in the RLW system shows great flexibility during welding, which is beyond the reach of traditional laser welding equipment.

The weld shown in Figure 5 can only be completed in the case of long-distance operation.

Another advantage of long-distance operation is that it can prevent metal vapor or spatter from contaminating optical components.

In addition, long-distance operations have lower requirements for fixtures, which can effectively reduce equipment costs in heavy or large product applications.

Figure 5. RLW is used for welding workpieces with poor accessibility

RLW has already highlighted its cost advantage in the production of BIW. A large number of research results show that the RLW system can reduce production costs in a variety of ways.

Of course, RLW also has disadvantages.

For example, shielding gas needs to be provided, excellent beam quality is needed, fixtures are needed, and welds need to be tracked.

For RLW, the biggest challenge is to spray shielding gas on the workpiece.

The auxiliary gas does not move synchronously along the weld, but keeps the entire processing area under gas protection.

In this way, a certain number of nozzles are required to simultaneously inject protective gas at a very fast flow rate to prevent oxidation of the entire processing area and avoid contamination.

Therefore, the amount of shielding gas required for remote laser welding is very large, and therefore becomes a cost-increasing factor.

At present, RLW is mainly used for mass production of flat panel assembly, and such a production line often requires a lot of welding.

The typical application area of RLW is the automobile manufacturing industry.

The researchers studied the RLW equipped with fiber lasers through four kinds of steel. The four base materials are: mild steel, galvanized steel, alloy galvanized steel and stainless steel.

The main process parameters are shown in Table 2 below.

Table 2. List of process parameters of RLW with fiber laser

In the laser processing process, increasing the laser power can increase the welding speed.

According to the data, when remote welding of mild steel, if the output power of the fiber laser is increased from 4 kW to 8 kW while the spot diameter remains the same, the welding speed will be significantly increased, but with the increase in laser power, There will be phenomena such as spattering, sagging welds and other welding quality degradation.

It can be seen from the chart that when the laser power is increased, the welding speed and penetration depth will increase accordingly. When performing RLW, welding speed is one of the most important decisive factors.

The welding speed roughly depends on the power density, the required penetration depth, the laser mode, the focus position and the number of scans.

The welding speed has an effect on the weld pool, the shape of the weld joint and the penetration depth.

Figure 8 illustrates the relationship between welding speed and welding depth when remote laser welding is performed on stainless steel 1.4301 with different laser powers. Figure 8. The influence of welding speed on RLW welding depth

Providing shielding gas during remote laser welding can bring many benefits, such as preventing oxidation of the welding area, suppressing metal vapor, removing metal particles in the beam path, stabilizing the welding process, and preventing the generation of plasma.

When performing RLW on steel, the most commonly used protective gases are argon, helium, nitrogen and compressed air.

The typical flow rate of RLW shielding gas is about 15-20 L/min, depending on the welding length. Figure 9. The influence of shielding gas on RLW welding depth and welding speed

When performing high-power remote fiber laser welding, the influence of shielding gas on welding depth and speed can be referred to Figure 8.

Regardless of whether or not shielding gas is filled, as the welding speed increases, the penetration depth will continue to decrease.

However, when the welding speed is lower than 5 m/min, the shielding gas becomes a very critical influencing factor. The main reason may be that the large amount of metal vapor generated in the small holes will inhibit the welding process.

When the welding speed increased to 14 m/min, the influence of the shielding gas on the RLW welding depth began to gradually increase.

Because of the long working distance, the allowable range of inclination angles for RLW is large.

The area and shape of the spot projected by the laser beam on the surface of the workpiece will change with the change of the inclination angle.

As the power density and absorbance change, the beam angle will affect the penetration depth and interface width.

The data shows that when the inclination angle is between 0° and 20°, it has no effect on the welding quality.

The focus position will affect the penetration depth, the shape of the solder joint and the quality of the cut.

The focal position of the laser beam changes with the thickness of the base material.

In order to obtain the best penetration effect, the focal position is usually recommended to be located about 1 mm on the upper surface of the workpiece.

Figure 10 shows the effect of the focal position on the depth of penetration when a disc laser is used for remote laser welding of steel.

It can be seen from Figure 10 that when the focal position is 0 mm on the surface of the workpiece, the penetration depth is the deepest.

As the distance of the point where the laser beam is focused gradually increases, the penetration depth decreases. Figure 10. The effect of focus position on RLW welding depth and width

This article aims to study the remote laser welding process with fiber laser.

Due to its multiple advantages such as high productivity, good flexibility, and low overall cost, the process has begun to be applied in the automobile manufacturing industry.

For the remote fiber laser welding unit, the scanner is the most important basic configuration.

However, in order to obtain good welding results, users also need to take a series of process parameters into consideration in remote laser welding, such as beam quality, laser power, welding speed, shielding gas supply, focus position, and so on. 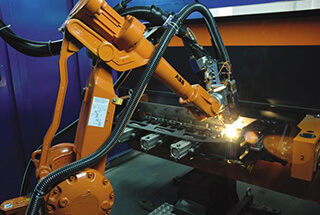