Welding robot laser is a kind of monochromatic and directionally focused energy beam produced by using the principle of light amplification realized by stimulated radiation. It can obtain energy beam with diameter less than 0.01mm and power density as high as 10W/m2.

It can be used as a heat source for welding, cutting and material surface cladding. Laser welding of welding robot is a welding method which uses visible light or ultraviolet light as heat source to melt and connect workpieces.

In laser welding, the laser irradiates the surface of the material to be welded and acts with it. Part of it is reflected, part of it is absorbed and enters into the material.

For opaque materials, the transmitted light is absorbed, and the linear absorption coefficient of metal is 107 ~ 108 /m.

The vaporized metal can prevent the residual energy from being reflected by the metal.

If the metal to be welded has good thermal conductivity, it will get greater penetration.

The reflection, transmission and absorption of laser on the material surface are essentially the result of the interaction between the electromagnetic field of light wave and the material.

After matter absorbs laser, it first produces excess energy of some particles, such as kinetic energy of free electron, excitation energy of bound electron, and excess phonon.

The original excitation energy is transformed into heat energy through a certain process.

Besides being electromagnetic wave like other light sources, laser also has some characteristics that other light sources don’t have, such as high directivity, high brightness (photon intensity), high monochromaticity and high coherence.

In laser welding, the conversion of light energy absorbed by materials to heat energy is completed in a very short time (about 10s).

Generally speaking, the absorptivity of metal increases with the increase of temperature and resistivity. 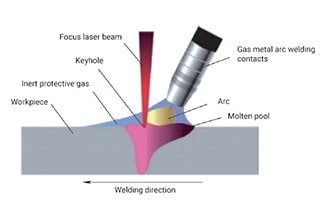