For the chemical industry, the application of high temperature and high pressure pipes and equipment in the plant has been the most common phenomenon, but a common problem in the installation and maintenance of some large diameter thick wall pipes and equipment is the phenomenon of magnetic bias blowing of weldments.

For example, on July 23, 2010, the air return pipeline of Unit 1 in the compressor plant of the olefin air separation workshop was reconstructed.

After the flange port and the pipe port were connected and aligned, serious magnetic bias blowing occurred and normal welding was not possible.

The phenomenon of magnetic bias blowing is mainly shown as follows: during the first welding construction at the root, the welding arc deviates to one side (pipe) metal or the arc generates explosion and cannot ignite the arc normally.

When tungsten argon arc welding is used, the arc does not burn toward the weld metal at the tip of the tungsten electrode, but toward the argon nozzle.

Magnetic bias blowing is a major problem in the field welding construction: it may affect the stable combustion of the arc, cause strip incomplete penetration at the root of the weld, interlayer porosity, etc., seriously affect the welding quality and cause welding rework;

In serious cases, the electric arc cannot be burned, which makes the welding operation impossible.

The latter is the case when we replace the air separation return pipeline.

The root cause of magnetic deflection is the existence of magnetic field around the weldment itself or the welding operation site.

The reasons for its occurrence are different.

In order not to affect the construction period and the smooth commencement of the device, we finally used the physical reverse winding degaussing method under the guidance of experts with the support of leaders at all levels of the plant.

The following is an introduction and principle analysis of these common degaussing methods:

The regular offset is the judgment basis of the turn direction we want to use.

If the welding arc is regarded as a wire and the four fingers of the right hand are pointed to the arc offset direction according to the right-hand spiral rule, the direction pointed by the mother finger is the “N” pole of the magnetic field carried by the base metal itself.

With the increase of winding turns, the phenomenon of arc offset will gradually weaken until the arc combustion returns to normal, indicating that the magnetic induction intensity completely disappears.

In the case of winding the welding wire, the backing welding, demagnetization and welding are carried out simultaneously, which is simple and fast.

Then extinguish the arc, place the welding handle wire 30mm from the magnetic pipe side to the welding joint, wind the corresponding number of turns in the reverse arc offset direction (the turns should be arranged in a tight and orderly manner without overlapping), ignite the arc again, and observe the arc burning condition.

If the arc still deviates from the original direction, the number of turns of winding wire shall be increased until the arc burns normally;

Finally, the groove shall be cleaned with an angle grinder, and welding shall be carried out when the welding wire is wound on the pipe.

Generally, the arc combustion can be kept stable throughout the priming process, without affecting the welding operation and welding quality.

In the process of priming, if occasionally the arc gradually inclines in the opposite direction of the original offset direction, the number of turns of the welding handle wire should be reduced in time to adjust the welding arc to normal.

After the priming process is completed, remove all the twisted welding wires, and the welding operation and welding quality will not be affected during the manual arc welding capping.

During the whole operation, pay attention to the following three points:

(1) The direction of arc offset and the reversibility of winding the wire cannot be mistaken, otherwise, it will be counterproductive;

(2) The number of winding turns of welding handle wire shall be appropriate to ensure effective demagnetization;

(3) The winding position of the wire shall not be too far from the edge of the groove, otherwise the demagnetization effect will be affected.

This demagnetization method does not require additional equipment and materials, and only requires the welder’s own tools, which is simple;

During welding, demagnetization shall be carried out at the same time. It only takes 3~5min from testing to formal welding.

Before welding, add a section of high magnetic conductivity material (such as silicon steel sheet, permalloy, etc.) to the butt gap in front of the part to be welded.

In this way, the high magnetic conductivity materials can be welded by moving forward while bottoming.

Heat the welded part to make the weldments on both sides of the crater in the demagnetization state, and then conduct welding.

However, this method has limitations for outdoor and large piece welding.

The magnetic transition point of pure iron is as high as 768 ℃. It is very difficult to raise the temperature and maintain such a height when welding outdoor or large pieces,

In addition, for alloy steel, the magnetic transition point of general weldments is close to or more than the phase change temperature point of steel, which is very easy to deteriorate the performance of base metal and the working conditions of welders are very deteriorated.

Welding operation is very difficult to master, and the rework rate of weldments is increased.

Therefore, the method of welding by bypassing the magnetic temperature area of the weldment is generally only applicable to the condition that there is a good welding environment and thermal insulation environment.

It is not applicable to the welding of large-diameter pipe fittings in our factory, especially CrMo alloy steel.

The weldments of various pipe fittings during production and construction make us realize that, in terms of the ability to overcome the magnetic bias blow of the arc, the shielded metal arc welding is superior to the tungsten argon arc welding, and the magnetic properties of the pipe fittings at the break are the largest and have the greatest impact on the welding.

The magnetic properties will change with the distance from the break.

Therefore, it is feasible to use the electrode arc welding to weld the magnetic conductive parts, and the magnetic field can be induced at the place 30mm away from the break of the two welding parts.

After many tests, experienced welders successfully found a way to divert the magnetic field: spot weld two steel plates at the upper and lower parts of the crater to ensure the symmetry of the four magnetic steel bars.

After that, the influence of magnetic bias blowing on welding can be thoroughly solved by adopting the methods of subsection magnetizing, subsection back welding and short arc welding.

In different situations, the constructors can choose the degaussing method according to the specific situation.

This simple method not only saves a lot of manpower and material resources, but also saves a lot of time to ensure that the construction period is completed on time. 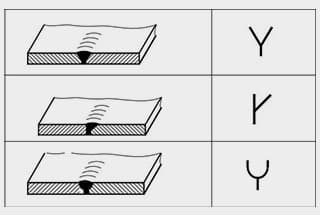