Bars with high carbon content have undergone many breaks.

For example, the shaft made of 45# steel will break when it is not used for a long time.

Sampling from the fractured parts and performing metallographic analysis often fails to find the cause.

Even if it is forced to find some reasons, it is not the actual reason. In order to ensure higher strength, it is also necessary to add carbon to the steel.

Iron carbides are then precipitated.

From an electrochemical point of view, iron carbide acts as a cathode, accelerating the anodic dissolution reaction around the substrate.

The increase in the volume fraction of iron carbides within the microstructure is also attributed to the low hydrogen overvoltage characteristics of the carbides.

The surface of the steel is prone to generate and absorb hydrogen.

While the hydrogen atoms penetrate into the steel, the volume fraction of hydrogen may increase, and the hydrogen embrittlement resistance of the material is significantly reduced.

The significant reduction in corrosion resistance and hydrogen embrittlement resistance of high-strength steels is not only detrimental to the properties of steel, but also greatly limits the application of steel.

For example, when automotive steel is exposed to various corrosive environments such as chloride, stress corrosion cracking (SCC) may occur under stress. It poses a serious threat to the safety of the body.

Since the carbon content is proportional to the hydrogen solubility, as the carbide of the hydrogen atom trap, the larger the volume fraction, the smaller the hydrogen diffusion coefficient inside the steel.

As the carbon content increases, the diffusion coefficient of hydrogen atoms decreases and the surface hydrogen concentration increases.

This is due to a decrease in the hydrogen overvoltage on the surface of the steel.

According to the results of the driven voltage polarization test, the higher the carbon content of the sample, the easier the cathode reduction reaction (hydrogen generation reaction) and the anode dissolution reaction are in an acidic environment.

In comparison with a peripheral matrix having a low hydrogen overvoltage, the carbide acts as a cathode and its volume fraction increases.

According to the results of the electrochemical hydrogen permeation test, the larger the carbon content and the volume fraction of the carbide in the sample, the smaller the diffusion coefficient of the hydrogen atom and the higher the solubility.

The slow strain rate tensile test confirmed that the higher the carbon content, the lower the resistance to stress corrosion cracking.

It is proportional to the volume fraction of carbide.

As the hydrogen reduction reaction and the amount of hydrogen permeating into the inside of the sample increase, the anodic dissolution reaction occurs, and the formation of the slip zone is accelerated.

As the carbon content increases, carbides are precipitated inside the steel. Under the action of electrochemical corrosion reaction, the possibility of hydrogen embrittlement increases. The use of steel in automotive parts and components is subject to some limitations, due to the significant reduction in its resistance to hydrogen embrittlement.

Hydrogen embrittlement is caused by corrosion of aqueous solutions.

In fact, this hydrogen embrittlement sensitivity is closely related to the carbon content.

It is not easy to develop ultra-high-strength automotive steels that combine excellent corrosion resistance and hydrogen embrittlement resistance. The key to the use of medium carbon or high carbon steel for components or drive shafts is the effective control of the carbide components in the microstructure. 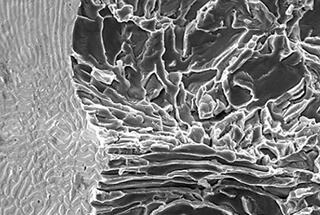