Skip to content
Table of Contents show
I. 1. What is High-Strength Bolt?
II. 2. What is the strength of high-strength bolts?
III. 3. Comparison between high-strength bolts and ordinary bolts
IV. 4. How to improve the fatigue strength of bolts?
IV.I. 1. Optimize design to reduce stress concentration
IV.II. 2. Improve manufacturing process
IV.III. 3. Set appropriate preload

Ultra High-Strength Friction Grip Bolt can reduce weight and increase installation space by reducing their own size under the same clamping force.

Therefore, the function and volume of the connected parts can be optimized, so that the equipment can achieve the purpose of overall weight reduction and performance optimization.

So what is high strength bolt?

What is the High-Strength Friction Grip Bolt?

I will show you today.

1. What is High-Strength Bolt?

High strength bolt is also known as high strength friction grip bolt, which is abbreviated as HSFG in English.

In daily communication, only the words “friction” and “grip” are omitted, but many engineering and technical personnel have misunderstood the basic definition of High-Strength Friction Grip Bolt.

Bolts with material grade more than 8.8 are “high strength bolts”?

The core difference between high-strength bolts and ordinary bolts is not the strength of the materials used, but the form of stress.

The essence is whether to apply preload and use static friction to resist shear.

It can be seen that the strength of materials is not the key to distinguish high-strength bolts from ordinary bolts.

2. What is the strength of high-strength bolts?

According to GB50017, calculate the tensile and shear strength of single ordinary bolt (class B) grade 8.8 and high-strength bolt grade 8.8.

Through calculation, we can see that under the same grade, the design values of tensile strength and shear strength of ordinary bolts are higher than those of high-strength bolts.

So where is the “strength” of high-strength bolts?

In order to answer this question, we must start with the design working state of the two bolts, study the law of their elastic-plastic deformation, and understand the limit state of design failure.

Ordinary bolt: the screw itself has plastic deformation that exceeds the design permission, and the screw is sheared.

High strength bolt: the static friction between the effective friction surfaces is overcome, and the relative displacement of the two steel plates occurs, which is considered as failure in design considerations.

But at this time, although it is damaged, the bolt rod can still use its own elastic-plastic deformation to bear the shear when it contacts the connecting plate.

According to the calculation of a single bolt, the tensile and shear design strength of high-strength bolts are lower than that of ordinary bolts.

The essence of its high strength is that when the joint works normally, no relative slip is allowed, that is, the elastic-plastic deformation is small and the joint stiffness is large.

It can be seen that under the given design node load, the node designed with high-strength bolts may not save the number of bolts, but its deformation is small, its stiffness is large, and its safety reserve is high.

The strength of high-strength bolts does not lie in the design value of their own bearing capacity, but in the large stiffness, high safety performance and strong damage resistance of their design joints.

There are great differences in construction inspection methods between ordinary bolts and high-strength bolts because of their different design stress principles.

The marking of ordinary bolts and high-strength bolts is the basic method for on-site identification of bolts of the same grade.

Since the values of torque value calculation for high-strength bolts in British and American standards are different, it is also necessary to identify the bolts of the two standards.

The price of ordinary bolts are about 70% of the price of high-strength bolts.

Combined with the comparison of their acceptance requirements, it can be concluded that the premium part should be to ensure the impact energy (toughness) performance of the material.

4. How to improve the fatigue strength of bolts?

No matter what complex load it bears, the common failure form of high-strength bolts is fatigue failure.

As early as 1980, experts studied 200 cases of bolt connection failure, of which more than 50% were fatigue failure.

It is very important to improve the fatigue resistance of high-strength bolts.

The fatigue fracture of bolts has the following characteristics:

3. Fatigue fracture is the result of micro damage accumulation to a certain extent.

For bolts, the failure forms are mainly the plastic deformation of the thread part and the fatigue fracture of the screw, among which:

a. Use large transition fillets

c. Cutting undercut at the end of thread

The main differences between the reinforced thread and the ordinary thread are the minor diameter d1 of the external thread and the root transition fillet R.

The main characteristics of the reinforced thread are that the small diameter d1 is larger than the ordinary thread, the root transition fillet radius increases R, and the stress concentration of the bolt is reduced.

There are specific requirements for R: R+=0.18042P, rmin=0.15011P, where P is the pitch, while the ordinary thread has no such requirements, and it can even be a straight section.

Strengthening the control of the heat treatment and surface treatment process in the manufacturing process of bolts can effectively improve the fatigue of bolts.

Bolts are first heat treated and then rolled into shape, which will produce large residual compressive stress in the bolt, so as to slow down the formation and development of cracks and improve the fatigue strength of bolts.

The fatigue strength of bolts usually decreases by 19.8% under the condition of surface decarburization.

Phosphating treatment of bolt surface is to prevent rust and stabilize the friction during assembly.

At the same time, the thread after plastic deformation can also improve the stress distribution of the thread and reduce the contact pressure on the thread.

This also improves the fatigue strength of the thread.

At the same time, the actual effective fatigue strength of bolted connections is also greater. 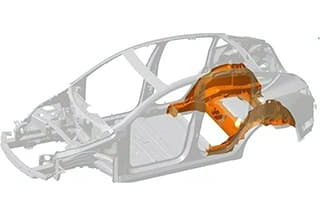