Skip to content
Table of Contents show
I. 1. Function of spring
I.I. Cushioning and damping.
I.II. Control the movement of the mechanism.
I.III. Store and output energy.
I.IV. Measure the force.
II. 2. Classification of springs
III. 3. Spring material and allowable stress
IV. 4. Manufacture of spring
V. 5. End structure of spring
VI. 6. Stress calculation of spring
VII. 7. The spring is not in place and the failure reason
VIII. 8. Spring precautions

Spring is an elastic element widely used in the mechanical and electronic industries.

When loaded, the spring can produce large elastic deformation and convert the mechanical work or kinetic energy into deformation energy.

After unloading, the deformation of the spring disappears and returns to the original state, and the deformation energy is converted into mechanical work or kinetic energy.

The ratio of spring load to deformation is called spring stiffness.

The greater the stiffness, the harder the spring is.

Control the movement of the mechanism.

Such as valve spring in internal combustion engine and control spring in clutch;

Such as spring scale, spring in dynamometer, etc;

According to the stress nature, the spring is divided into: tension spring, compression spring, torsion spring and bending spring.

Tension spring is a coil spring that bears axial tension.

Tension springs are generally made of circular section materials.

When not under load, the coils of the tension spring are generally tight without clearance.

Its material section is mostly circular.

It is also made of rectangular and multi strand steel.

The spring is generally of equal pitch. There is a certain gap between the coils of the compression spring.

When subjected to external load, the spring shrinks and deforms and stores deformation energy.

The torsion spring can store and release angular energy or statically fix a device by rotating the force arm around the central axis of the spring body.

The spring pulls them back to their original position, generating torque or rotational force.

Air spring is a non-metallic spring that adds pressure air into the flexible closed container and uses the compressibility of air to realize the elastic effect.

When used in the suspension device of high-grade vehicles, it can greatly improve the ride comfort of vehicles, so air spring has been widely used in automobiles and railway locomotives.

The diameter can reach hundreds of microns and the length can reach a few centimeters.

Spring is often subjected to alternating and impact load in work, and requires large deformation, so spring material should have high tensile strength, elastic limit and fatigue strength.

The process should have certain hardenability, not easy to decarburize and good surface quality.

2) The allowable stress of shackle tension spring is 80% of the value in the table;

If the spring is subjected to strong pressure treatment, the allowable stress in the table can be increased by 20%

3) According to different mechanical properties, the carbon cable spring steel is divided into four groups, of which group 1 has the highest tensile strength, group II takes the second place, group III has the lowest, and group II4 has the same tensile strength as group II, but the plasticity is better.

Refer to the following table for Sb of carbon cable spring steel wire.

In mass production, it is rolled on the universal automatic spring coiling machine;

For single piece and small batch production, it is made by ordinary lathe or hand. When the diameter of spring wire is less than or equal to 8mm, cold coiling method is commonly used.

Heat treatment is required before coiling and low-temperature tempering is required after coiling.

After the hot coil, it shall be quenched and tempered at medium temperature.

After the spring is formed, the surface quality inspection shall be carried out, and the surface shall be smooth, free of scars, decarburization and other defects;

The spring subjected to variable load must also be subject to surface treatment such as shot peening to improve the fatigue life of the spring.

It does not participate in the deformation during work, so it is called dead circle or supporting ring.

The end of the tension spring is provided with a hook for installation and loading. There are four types of end structures commonly used;

Semicircular shackle and circular shackle are easy to manufacture and widely used. However, due to large bending stress at the transition of the hook, they are only suitable for springs with spring wire diameter d ≤ 10mm.

The adjustable and rotatable hooks are in good stress condition, and can be turned to any position for easy installation.

Through the analysis of the section method, it is known that the section of the spring wire is subject to the shear force F and torque T = FD / 2, and the shear stress caused by torque is:

If considering the influence of shear stress caused by shear force F and the spiral curvature of spring wire, the maximum shear stress t occurs in figure (b) on the inner side of spring, and its value and strength conditions shall be:

K can also be found directly from table 2.

It is known from the table that the greater C, the smaller the influence of K on T;

In equation 1, the formula for calculating the diameter of spring steel wire according to the strength condition can be obtained by replacing f with the maximum working load F2 of spring:

The strength calculation method of tension spring is the same as that of compression spring.

7. The spring is not in place and the failure reason

In practical work, we often encounter that the spring can not push the moving object to the set position, that is, the calculated free length of the spring becomes shorter.

The main reason is that there is no initial compression treatment, that is, the operation of compressing a manufactured spring to its compression height or tightening height with a large force (if necessary), and it cannot return to its original free length after release.

Generally, after 3-6 times of compression, the length will not be shortened, that is, the spring “positioning”.

The spring is permanently deformed after initial compression.

In practical work, the compression spring should be able to maintain its working length even if it is subjected to a force beyond the elastic limit of the material.

Therefore, the length of the finished spring should be equal to the calculated length of the spring plus the initial compression shrinkage, which can avoid the spring not in place, so as to avoid dangerous stress when the spring coil is tightened together, resulting in abnormal indication line of the spring.

During the heat treatment of the finished spring, especially the hardening and tempering process, the workpiece must be placed horizontally (lying) in the furnace to prevent the spring from becoming shorter due to its own weight, resulting in improper operation. 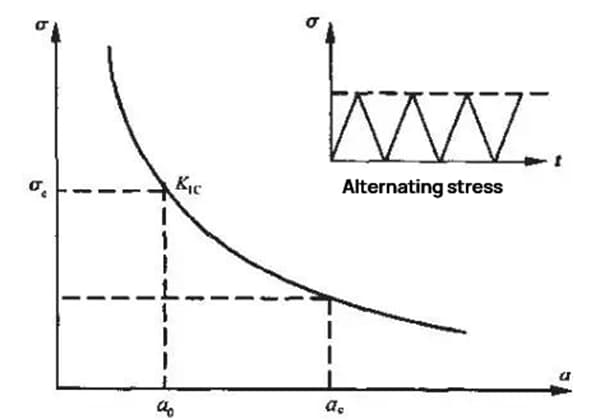