A narrow and long workpiece is a kind of workpiece with a large length-width ratio and positioning with a short edge during bending.

The workpiece out of tolerance is often caused by the short contact size between the positioning edge of the workpiece and the backstop positioning of the press brake machine.

Based on the consideration of safety and convenience, the existing press brake generally adopts the rear stop finger as the positioning device.

After simple programming, the rear stop linkage, single action and other functions can be realized, which is enough to meet the processing requirements of bending parts of various shapes.

However, the rear stop positioning used in CNC press brakes also has its limitations.

If the width of the positioning edge of the workpiece to be processed is too narrow (such as narrow and long workpiece), when the rear stop finger is used for positioning, the contact size between the workpiece and the rear stop finger is too short, which is easy to lead to problems such as inaccurate positioning size, dislocation of bending position and design bending line, resulting in poor quality of formed products, frequent rework and repair, resulting in a huge waste of materials, energy and labor.

In production, it is often necessary to fold the workpiece (steel plate) into a certain angle, and the bending radius at the bending position is small.

This process is bending.

Bending is the process of applying an external force to the sheet metal by using the punch and die to bend it to a certain angle or shape.

The bending deformation of the workpiece is divided into several stages.

In the beginning, the material is free bending.

With the pressing down of the top punch, the material is gradually close to the surface of the lower die.

Then, when the punch continues to press down, the bending area of the material becomes smaller until it contacts the punch at three points.

When the punch is pressed down to the lowest point of the stroke, the material is completely close to the punch.

Therefore, for workpieces with narrow width, the cross-section will be slightly fan-shaped after bending;

For wide plate workpieces, the bending cross-section has no obvious deformation.

At this time, the center line of the lower die of the press brake is the workpiece bending line.

The state of workpiece positioning is shown in Fig. 1. Limitations of the positioning device of press brake Operators need to align repeatedly to ensure the primary forming effect, but the effect is often not ideal, which seriously affects production efficiency and product quality.

Based on the consideration of the limitations of the positioning device of the CNC press brake, a positioning optimization device for the machine is designed, as shown in Fig. 3. The back plate is used to close to the side of the lower die of the bending machine;

The movable locking block is used to cooperate to lock the whole device on the lower die of the bending machine;

The front plate is used to install the screw, and the locking screw is used to fix the movable locking block on the lower die of the bending machine;

Use of positioning optimization device

When using the above positioning optimization device, first align and clamp it on the lower die of the bending machine, and use a square to detect its state. (1) The production efficiency is improved.

Before using this device, narrow and long workpieces often need to be measured repeatedly to ensure accurate positioning, and the error is often large.

After using the optimization device, the quality problems caused by inaccurate positioning of the bending line do not occur again, and the product quality is greatly improved. 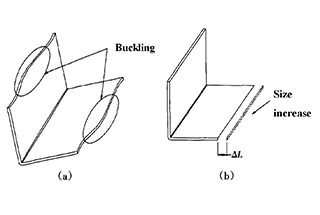