The press brake is mainly used to bend the plate in a straight line.

The sheet metal can be pressed into a certain geometric shape by using a simple die and process equipment, and it can also be processed by stretching, stamping, punching and corrugated pressing.

Its processing has the advantages of high bending straightness, no tooth marks, no peeling, no wrinkles, etc.

With the continuous development of the manufacturing technology of CNC press brake, it is increasingly favored by the majority of sheet metal manufacturing enterprises for its high positioning accuracy, convenience, flexible disturbance compensation and good consistency of processed products.

However, in the limited circumstances, how to better use the press brake to give full play to its functions and advantages, has become the concern and urgent problem for CNC press brake manufacturers to solve.

In the long-term use process, we have effectively expanded the function of the press brake and accumulated experience by adding auxiliary tooling and reforming the existing die, as well as the flexible application on site.

This article takes the numerical control press brake HFT170 from AMADA as an example and introduces the detailed techniques in use.

If wanting to use the machine tool flexibly and easily, it is necessary to add auxiliary tooling.

The opening height of the press brake refers to the distance between the upper and lower worktables.

Because the numerical control press brake HFT170 has a large opening height, it is considered to use the large opening to expand the processing range.

As shown in Figure 1, adding a transition plate to the original transition plate can improve the bending height of the side of the part (increase by 85 mm), so it can carry out deep bending processing with a higher bending edge.

The width of the self-made transition plate can be customized according to its common parts, which is most suitable for small width parts with high bending edge on both sides.

As shown in Figure 2, the bench angle is installed in front of the machine to place small parts and reduce the time of taking parts.

At the same time, a small worktable is installed to facilitate the processing and collection of small workpieces.

2. Make full use of the die

The use of the press brake mainly depends on the upper and lower die.

If the number of dies is small, and the use of inflexible will greatly restrict the processing range of the machine tool.

Therefore, under fixed conditions, how to maximize the function of the existing die by optimizing the combination and local transformation is a problem that every machine tool user must consider.

The following is the unit in use through the CNC press brake die change to expand the function of the introduction.

When the upper die is used for a long time, its tip will wear irregularly, and the height of the die will change, which can not guarantee the bending accuracy.

By grinding, correcting the tip R, and matching with the large V-shaped groove, the thick plate can be folded, thus prolonging the service life of the die.

In the case of no compound bending die, how to solve the forming problem of pressing dead edge is an example.

The pressed dead edge is a bending shape with two layers overlapped, which is usually used for strengthening.

Generally, there are few pressed dead edges on the plate with a diameter of more than 2.0 mm.

The pressing dead edge needs to be formed by compound bending die, and it can only be formed by more than two processes.

The common method is to use a compound bending die, as shown in Figure 3.

In the first step, the material is folded into 30°, and in the second step, the 30° bending angle is placed at the front end of the compound die and pressed into a pressed dead edge.

There is no compound bending die in this unit, only existing 30 ° acute bending die.

The first step of compound bending die can be completed through the existing die, and the second step can only be found another way.

The upper die needs to find a plane, take out the existing scrapped upper die, and make the knife edge into a plane style by grinding, so as to solve the forming problem of the pressed edge.

The modified die can be flattened.

In the actual processing, the machine tool operators sometimes make mistakes, including the reversed bending edge and the unequal bending size.

Only the bending edge can be flattened, but it is very hard to flatten, and it can be easily leveled by using the above die combination.

It is easy to press the parts by hand to the upper and lower die, and then use the CNC press brake to flatten the parts.

In planning, the following factors should be taken into account:

This can reduce the time and times of replacing the die.

When the bending part is narrow and the length is long, it is difficult to position.

In the process, it is often used to fix the gauge for positioning, and the bending part is easy to tilt.

Therefore, the method shown in Figure 4 is adopted to stick the die firmly on the lower die to ensure the right angle, so that the part is not easy to tilt when bending. Bending sharp-edged parts are not easy to close to the back of the gauge.

Usually, the minimum size L is less than or equal to 10 mm, which is immediately after the fixed gauge and are considered to use positioning devices.

The actual work of the design and process are easy to neglect, such problems often occur.

Due to the different needs of customers, the R value required on the same bending edge is different.

In the process of machining, for the parts that do not require high dimensional accuracy, the base plate is used to increase the R-value in order to get the required R-value after bending.

According to the design requirement R, the thickness of the plate is selected according to the relationship between V and inner R, and is folded into the shape shown in Fig. 5.

When using, the clamp is used to clamp the upper die.

This method is convenient to use and can be used in multiple layers. We use HFTI70 press brake with two hydraulic cylinders and tries the multi-die setting as shown in Figure 6.

This means that the upper and lower dies of the same model can be installed at one time, which can complete several bending processes of the whole part, and reduce the time of die installation and repeated handling of parts.

At present, the equal height bending upper die has appeared in the market, and the height of upper die is unified.

Different shapes of molds can also be used on the same worktable, so that different dies can be segmented and bent, and the dies can be installed once and the parts can be transported once.

After the typical parts are processed, the processing parameters should be recorded in time, and the program should be stored in the storage area of the press brake with the part drawing number.

In this way, it can be reused in the future, greatly reducing a series of preparatory work before bending.

A table is also made to contain the specific settings of part name, drawing number, figure, material and bending parameters.

The table is divided into steel plate, aluminum plate and stainless steel plate, and each type is distinguished by material thickness, which would reduce the time consumed in finding typical parts.

When combined with the process cards, it is a very complete machining guide that allows even new employees with little experience to follow the prompts for machining parts.

In field processing, the die length is often less than the bending edge, because many special dies are determined according to the use of fixed products.

When the die length is less than the bending edge, the segmented bending method is used.

8) Position with the stud on the back gauge

When the size of the bending part is large, it often occurs that the part sinks due to its own weight and the hand-held part is short, so it is not easy for the operator to hold the workpiece.

The parts can be placed horizontally on the back gauge, which not only reduces the number of operators, but also effectively ensures the machining accuracy.

In the actual processing, the bending of deep size closed shape parts can be flexibly used.

Without closed deep bending die, when bending the parts as shown in Fig. 7, the clamping state in Fig. 8 is adopted to separate the transition plates, the spacing is slightly larger than the width of the parts, and the reasonable size distribution can bend two parts at a time. The processing methods and techniques described above have solved the processing problems of a large number of similar parts in the unit’s products.

They are quite suitable for the development characteristics of multi-variety, small-batch and short production cycle.

The machining method and using techniques can also be applied to the CNC press brake with a similar structure. 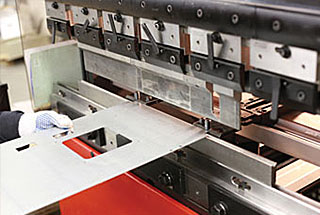