Transformation of steel during heating

The C-curve is a tool for analyzing the microstructure transformation of carbon steel during cooling after it is heated to obtain austenite.

There are two cooling methods for steel heat treatment process:

It means that the steel heated to austenite is cooled to a certain temperature below the A1-line at a relatively fast cooling speed, and then it is insulated to make the austenite undergo structural transformation under isothermal temperature.

Refers to the continuous decrease of temperature with the extension of time during the cooling process.

In actual production, most of the cooling process is continuous cooling.

The austenite of eutectoid steel is undercooled to A1 ～ 550℃, and the products of isothermal transformation belong to pearlite structure.

The transformation of austenite into pearlite is also a process of alternate nucleation and growth of ferrite and cementite. As shown in Fig. 3-7.

Firstly, the cementite crystal nucleus is generated on the grain boundary of austenite.

The carbon content of cementite is higher than that of austenite.

Therefore, the carbon atoms in the surrounding austenite shall be absorbed.

At the same time, the carbon content of the nearby austenite shall be reduced, which creates favorable conditions for the formation of ferrite and converts this part of austenite into ferrite.

In this way, austenite is finally completely transformed into pearlite structure with ferrite and cementite interlayers.

The formation of pearlite requires the movement of carbon atoms.

When the temperature is high, the movement distance of carbon atoms is large, and the pearlite lamellae formed is wide.

When the temperature is low, the carbon atoms are difficult to move, and the pearlite lamellae formed is dense.

The microstructure transformed from 727℃ to 650 ℃ is pearlite;

The structure obtained by transformation between 650 ℃ and 600 ℃ is sorbite, also known as fine pearlite;

The transformation between 600 ℃ and 550 ℃ results in troostite, also known as very fine pearlite.

These three kinds of pearlite like tissues have only the difference of lamellar spacing, and there is no essential difference.

The products of isothermal transformation of austenite in eutectoid steel from undercooling to 550 ℃ ~ 240 ℃ belong to bainite structure.

The upper bainite is formed in the upper part of this temperature zone;

In the lower part of this temperature range, lower bainite is obtained.

The lower bainite has higher hardness and strength, better plasticity and toughness, while the upper bainite has no practical value.

It is extremely difficult for carbon atoms of austenite to move below 240 ° C.

This supersaturated solid solution of carbon in α-iron is called martensite.

When the austenite of eutectoid steel is undercooled to 240 ° C (MS), it begins to transform into martensite.

With the decrease of temperature, the martensite gradually increases and the undercooled austenite continuously decreases.

Until – 50 ° C (MF), the undercooled austenite completely transforms into martensite.

Therefore, the structure between MS and MF is martensite and retained austenite.

Due to the different carbon content, martensite has two forms.

a. Cooling with furnace

When the cooling curve intersects with the pearlite transformation start line, austenite begins to transform to pearlite;

Since the transformation is carried out in the pearlite region, a pearlite structure is obtained.

b. Cooling in air

Finally, the mixed structure of martensite and troostite is obtained.

I.e. the product cooled in oil.

Due to the fast cooling speed, the cooling curve does not intersect with the pearlite transformation starting line.

When it is cooled below the martensite transformation starting line, austenite will transform into martensite.

The continuous cooling curve is located at the lower right of isothermal C curve, the P transition temperature is lower and the time is longer;

Subcooling a of hypoeutectoid steel in a certain temperature range will partially change into B during continuous cooling.

Because it is difficult to determine the CCT curve, many steels still do not have it.

In actual heat treatment, the continuous cooling transformation process is often qualitatively estimated by referring to the C curve.

During quenching, the cooling speed is different at each part of the workpiece section.

The surface cooling rate is the highest, which is higher than the critical cooling rate of martensite. After quenching, martensite structure is obtained.

The cooling rate decreases as it reaches the center.

If the cooling rate at a certain depth from the surface starts to be less than the critical cooling rate of martensite of the steel, there will be non martensitic structure after quenching, and then the workpiece will not be fully dissolved.

(2) Effect of hardenability on mechanical properties

The mechanical properties of steels with good hardenability are basically the same along the section;

However, the mechanical properties of the steel with poor hardenability are different along the section.

The closer to the center, the lower the mechanical properties, especially the toughness value.

Fig. 5-53 comparison of mechanical properties of steels with different hardenability after quenching and tempering treatment

(3) Determination and expression of hardenability

There are many methods to measure the hardenability.

According to GB225, the end hardenability test (end quench test) of structural steel is the most commonly used method to measure the thickness of the hardenable layer.

The critical diameter is an intuitive measure of hardenability.

The critical diameter is the maximum diameter of the semi martensitic structure (50%) that can be obtained at the core of the steel after cooling in a quenching cooling medium, expressed by Do. 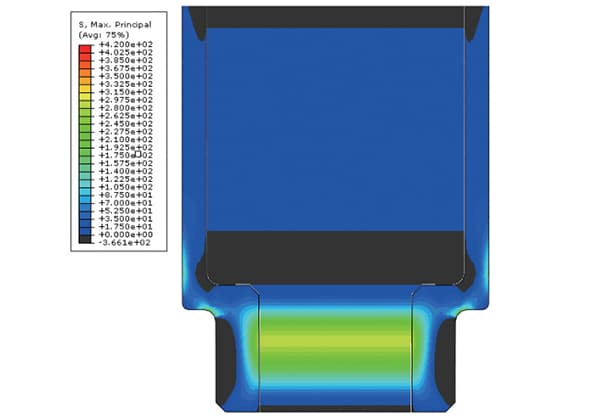