In order to improve the bending accuracy of elevator sheet metal parts, the bending radius (R-angle) of several commonly used materials such as SPC, SPHC, SUS304 and 804-GG etc. bent at 90° on the CNC press brake in the sheet metal workshop was accurately measured with an optical measuring instrument, and the bending coefficient was calculated using vernier calipers.

The test results provide reference and data support for the selection of suitable bending tooling, improvement of bending R-angle accuracy and calculation accuracy of bending dimensions.

The bending radius (inside R) and bending coefficient are important factors that affect the quality of workpiece bending.

The existing formula for calculating the 90° bending factor is α = 1.36t + 0.43R (t is the material plate thickness), and the main errors in the usual calculation of the bending factor are as followed:

(1) The difference between the t value and the true thickness of the material.

(2) The deviation between the actual bending R inside and the drawing required R inside (R inside is usually taken according to the drawing when calculating α);

(4) The influence of the material and bending method on the bending R is not considered.

When the workpiece is bent several times, the error of the bending coefficient will accumulate, resulting in poor or unqualified dimensional accuracy of the drop material.

This will help to select the appropriate bending die, improve the bending forming R accuracy and expand the dimensional calculation accuracy.

The test materials are SPCC, SPHC, SUS304, 804-GG purchased by our company, and their thickness specifications are shown in Table 1.

The sample size is 100mm×100mm, which uses laser cutting and blanking, and the dimensional accuracy can reach 0.1mm.

The test bending machine is a CNC press brake in the elevator production sheet metal workshop.

The V-groove has FASTI-50 and Beyeler, and the scimitar upper die is selected, as shown in Figure 1. The three-point bending machine is 3P250, and the straight knife upper die (pointed cutter R7 and round cutter R9) is selected, as shown in Figure 2. The true thickness of the specimens was measured with a micrometer and four pieces were averaged for each specification.

The specimens were bent on different bending dies at a bending angle of (90 ± 1) °, which try to ensure that the length of one side was 50mm, as shown in Figure 3. Each specification should be repeated 5 times.

After the bending was completed, the bending angle contours were scanned with an optical measuring instrument to calculate the bending outer angle R outside and inner angle R inside, as shown in Figure 4.

It uses a vernier caliper to measure the length of both sides to calculate the bending coefficient,

Each specification should be repeated 5 times and take the average value.

The attached table is a collated test result.

The data shows the true thickness of the test material, the inner and outer radius of the 90° bend, the bending coefficient and the thinning of the bend.

The actual thickness of the specimen measured with a micrometer is compared with its nominal thickness, as shown in Table 3.

Table 3 The actual thickness of the test materials (mm)

Comparing the Rinner under different bending conditions, it can be seen that the Rinner is influenced by the material, plate thickness, bending method, and bending tooling.

Of these four factors, the situation of three other factors being equal:

Comparing the same slot width bending lower die (Bv=7mm, 12mm and 16mm) shows that the bending Rinner in three-point is slightly larger than that in V-groove.

Figure 5 is a comparison of the three-point bending R angles for the lower die slot width Bv is 24mm, 32mm and 40mm, corresponding to about 4.0mm, 4.7mm and 5.9mm of Rinner, respectively. Therefore, in addition to the bending die slot width Bv, the material, bending method (V-slot and three-point) also affects the bending Rinner, which should be paid attention to.

In the test, the difference between Router and Rinner is used to represent the average thickness near the bending angle, i.e., t’ = Router – Rinner.

From the data in the attached table, it can be seen that thickness reduction occurred in all cases in this test case.

Most of the reducing ratio is within 6%-15%, and the influence of material thickness, bending mode and slot width on the thinning rate is more complicated, and the rule is difficult to identify.

However, it can be seen that the SPHC thinning rate is lower, about 4% to 6%.

The test’s Rinner uses an optical measuring instrument to scanning calculate, while the roundness value can be calculated.

(1) When Bv = 7 ~ 16mm, the roundness value of Rinner and Router is very small, most of which is ≤ 0.05mm, indicating that the bent inner and outer corner contours highly match the degree of roundness.

(2) When Bv = 24mm, 32mm and 40mm (all three-points type), the roundness values of Rinner and Router are slightly increased, exceeding 0.1mm, which means that after the groove width Bv of the lower bending dies increases to 24mm, the degree of arc of the inner and outer contours of the bending decreases.

The Rinner is influenced by the material, plate thickness, bending method and bending tool, the actual Rinner is the simplest and most effective method.

For new materials or bent parts with other thicknesses, it is necessary to actually measure the true thickness and the bending Rinner of the bending tool.

Based on the above analysis, several conclusions can be obtained:

The test shows that the Rinner of SUS304 is slightly larger than that of SPCC under the same bending parameters;

(3) When the other bending parameters are the same, the Rinner of the three-point bending is slightly larger than the V-groove bending, so the bending work center should be considered when selecting the bending coefficient;

Accumulating the real thickness of the commonly used bending materials in the workshop and the corresponding bending mold forming Rinner can calculate a more accurate bending coefficient. 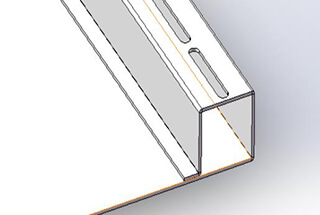