The sheet metal bending process is not only directly related to the smooth progress of enterprise production plan, but also has a very important impact on the economic benefits of enterprises.

Therefore, the safety of the sheet metal bending process has attracted more and more attention from enterprises and society. For the production management personnel of the enterprise, in the whole production process, they should not only pay attention to the safety of the operators of the bending machine, but also comprehensively detect the hazard sources affecting the bending machine, and put forward corresponding safety protection measures to protect the safety of the front-line workers in the workshop.

Generally speaking, the hazard sources during the operation of the press brake machine mainly include mechanical injury and electrical injury.

Mechanical injury refers to a mechanical accident caused by the accidental release of mechanical energy.

It has many hazard sources and is also the most vulnerable injury to bending operators in the production process.

The hazard sources of mechanical injury mainly include the following aspects:

Because when the operator extends his hand between the upper and lower molds, the upper mold or rear positioning of the press brake may collide with his hand, which will pose a threat to personal safety. There are great requirements for the cooperation ability of operators between people and between people and machines, the probability of accidents increases, and the parts are very likely to collide with their heads during the descent, which will pose a threat to life safety.

(3) When the press brake machine is used, the parts are pushed by hand by stepping on the control switch to move the upper and lower dies under the action of hydraulic pressure, so as to meet the requirements for part bending.

When bending a small part or the part size is smaller than the upper die of the bending machine, the operator’s hand will be clamped between the upper die and the part if he is not careful due to the incorrect bending gesture.

Fig. 2 shows the hand between the upper and lower dies when bending small parts. 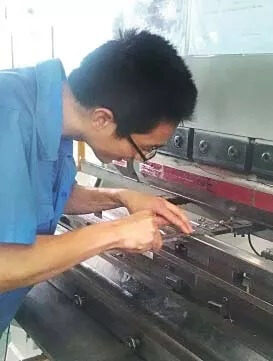 (4) During the whole operation process of the press brake machine, it is also necessary to avoid the materials on the bending machine being stacked too high, resulting in the falling of parts and the injury of legs or feet.

In addition, materials shall not be placed too close to the bending machine to prevent parts from scratching workers when personnel turns around.

(5) When two people operate the bending machine, if the double footswitch is not turned on, it may happen that one person has started to step on the foot switch and the other is still adjusting the position of parts, resulting in parts scratching the operator and parts hitting the operator’s chin.

In addition, in the process of pushing parts, because the edges of some parts may be relatively sharp, the inspectors’ hands will be scratched.

Figure 3 shows the situation of two people stepping on the foot switch. (6) Bending, as an intermediate process, undertakes the plate cutting and punching process in the previous step and the viscose, welding and assembly process in the next step.

In the process of placing, hoisting and transportation, parts may fall and hurt or crush personnel.

Among the bending machine operation accidents, the accident with the highest mortality is caused by electrical injury, which is the most direct injury to the human body, and the hazard sources causing this injury are mainly shown in the following aspects:

(1) In the process of operating the bending machine, due to the poor quality of the tools and instruments used by the personnel, it is likely to cause electric shock accidents.

In addition, the motor and lighting facilities will emit a lot of heat energy after being powered on, and the operators will be scalded if they are not careful.

(2) Some wires on the bending machine will be damaged due to the long service time.

When the wire is partially exposed, the bending machine operator or equipment maintenance personnel may have an electric shock accident due to the damage of the wire.

(3) Bending machine operators will be shocked when they operate against regulations on electrical equipment.

In addition, in the process of continuous movement of air around electrical equipment, a large amount of static electricity may cause electric sparks and then lead to fire.

Analysis of safety protection in the bending process

(1) From the perspective of prior protection work, the bending machine operator must first do a series of protection work before the operation, such as wearing anti-skid shoes, gloves and safety helmet.

In addition, the operators of the previous process must deburr the large burrs on the bending parts.

(3) Ensure the safety of the position of the parts to be bent and the finished parts and the protection of the parts. The operators shall pay attention to keeping the man-machine synchronization, and the bending work area shall be isolated with guardrails.

A danger source information board (Fig. 4) on the bending production site is posted above the press brake machine, which clearly points out the potential safety hazards in the bending operation area, points out that improper operation of the press brake is easy to cause injury to the operators themselves, as well as injury to other personnel passing by during part handling; For the analysis of hazard sources in the bending operation area, it is pointed out that the door panel and other parts are long and heavy, the lifting and falling speed of parts during bending is too fast, and the operator does not pay attention to whether there are human main reasons behind the bending machine.

(1) The operator of the press brake machine must wear insulating equipment during electrical inspection. Illegal operation is strictly prohibited during the inspection.

When checking the electrical insulation and equipment grounding, be sure to carefully check whether the wires are damaged and leakage in advance.

Once such conditions are found, the inspection needs to be stopped immediately.

(2) Ensure that the power supply is disconnected when checking the circuit and instrument.

In order to reduce the risk of inspection, red warning signs must be posted on the surrounding guardrails.

During the inspection, try not to use temporary power supply and circuit to prevent leakage and fire.

(3) Comics and text descriptions of precautions for bending safety operation (Fig. 5 and Fig. 6) and switch status signs of the photoelectric device of the bending machine need to be posted above the machine to increase the effect of visual board management. 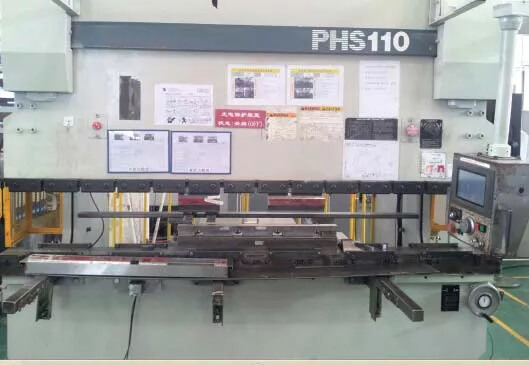 In short, there are many potential safety hazards in the production process of the bending process.

We must have a full understanding of the existing hazard sources and take the initiative to do a good job in self-protection.

Only in this way can we carry out production and work on the basis of ensuring our own safety.